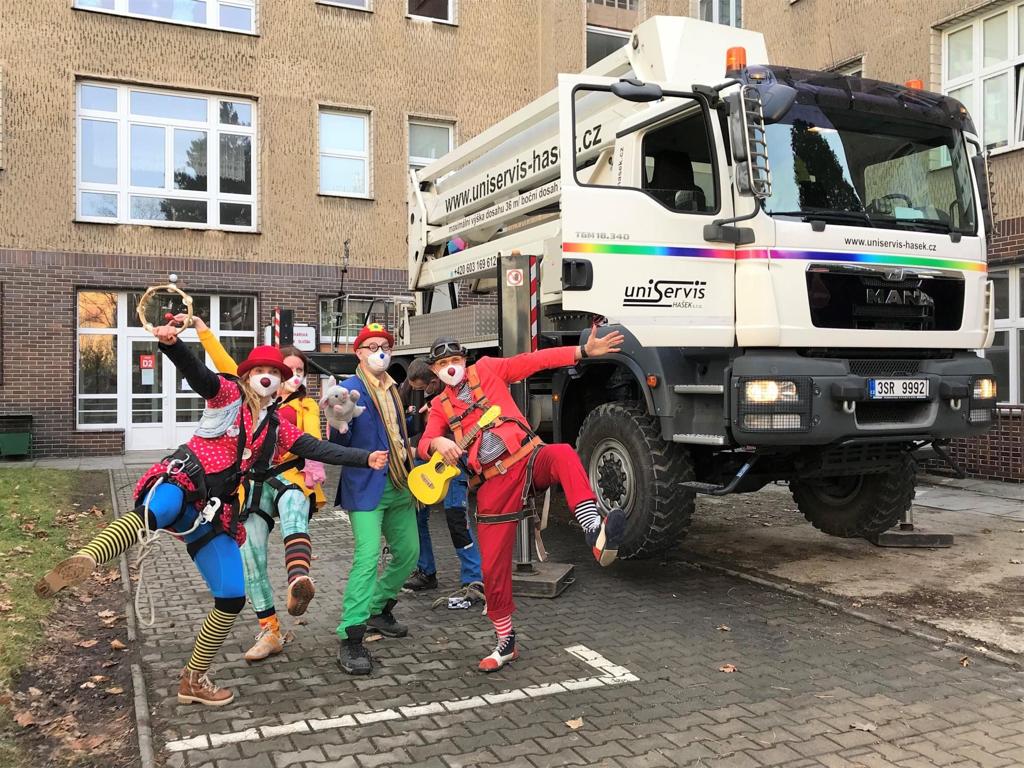 The corona virus lockdowns have also forced us here at C4C to think creatively and out of the box. What can be done for children not only suffering from oftentimes grave illnesses, but now also from extreme isolation? Clowns are not allowed to enter hospitals anymore – how can we reach them anyway?

Answer: Platform clowning! The recipe is easy: Take a few willing clowns, free of vertigo, secure the cooperation of the hospital, arrange a construction crane to drop by and tell the kids to watch the window of their hospital room…

And this is how our last platform clowning at Kladno hospital materialized. Our little patients were told to watch the window of their room on the 4th floor of the hospital – something was about to happen! To their amazement, seemingly out of nowhere, a bunch of balloons rose up and, would you believe it – some clowns were apparently hanging on to them!! On top of it they were singing songs as they slowly rose up the window, accompanied by the cheers of the children watching the spectacle!

After realizing that the clowns were not actually hanging from the balloons and a crane platform was holding them up, the next 20 minutes were filled with laughter, joy and excitement.

“It was certainly touching for all attending, children, parents and staff alike,” says C4C´s Martina Pupcsikova. “One mother was very emotional and had tears in her eyes. That was a super strong moment!”

As the clown descended on their platform, slowly vanishing from view, the children threw kisses and spontaneously made hearts with their fingers. They had not been forgotten – clowns had found a way to make them smile and laugh!

P.S. A special “Thank You” goes to our longtime partner and patron Uniservis s.r.o., headed on by Ilja and Milos Hasek. Their construction crane “accidently” drove by the hospital when our clowns couldn´t enter the Kladno hospital because of Corona restrictions.