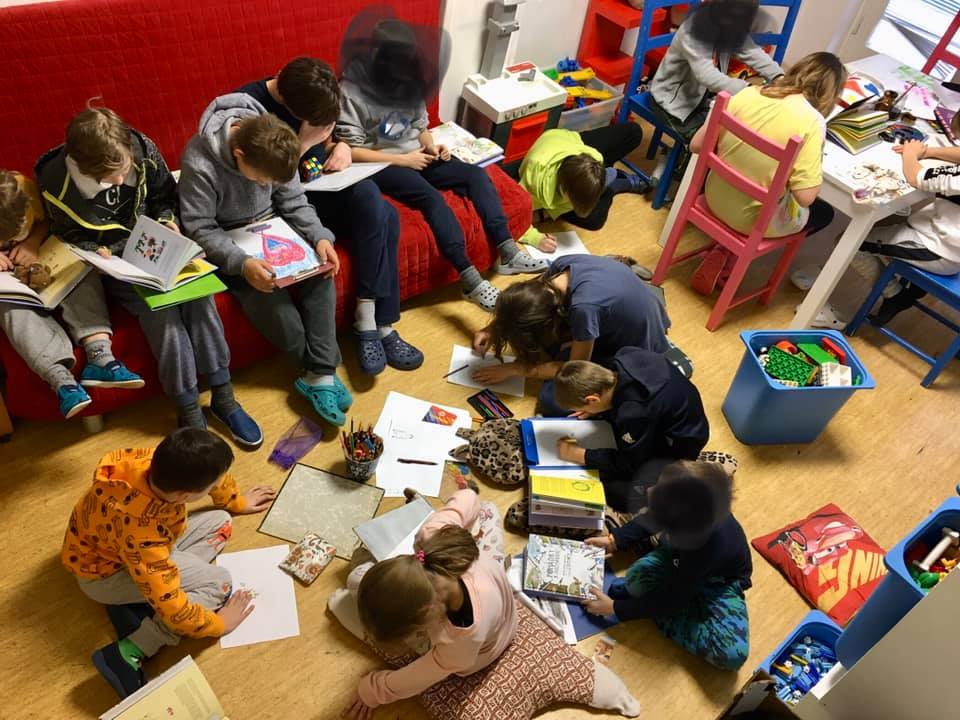 An in-depth deep-dive into the work of C4C´s Martina Pupcsiková , who visits children in psychiatric and surgery wards with her “Playing with Colors” initiative, reading fairy-tales she authored and doing art projects with them.

Martina Pupcsiková started visiting child psychiatry wards three years ago during the preparation for her book Fairy Tales to Doodle By, when she read fairy tales to resident children and illustrated the texts with them..

“I was afraid of entering this department at first,” she admits. “Child psychiatry scared me beforehand. What would I see there? You enter with a lump in your throat. But such fears can be reprogrammed in the mind – I don’t go there to see sick children, but to see children for whom I can make two hours of their lives more pleasant.”

Two hospital wards were a true challenge for Martina: child oncology and child psychiatry.  Here, the children stay for a month or more. They are longer alone and feel more insecure than in other wards. “Playing with Colors” allows them to relax – it therefore belong to these wards all the more.

In her work in hospitals and schools, Martina has found that her fairy tales and art projects (Playing with Colors) creates a space for spontaneous expressione. As a result, all children started to talk with her, sooner or later! Even the silent ones. They began to share, to snuggle, to cry and to laugh with her. Sometimes they would reveal things that they had been keeping from the medical staff.

Martina tells with a slight smile how she has come across three children who have even stopped talking altogether. It’s as if they were mute. “I had to consult a psychologist on how to work with these children – I was floundering. Should I encourage them to respond, or should I just respect that they are silent? I behaved as if nothing was abnormal – they are silent and I read to them, I ask them questions but don’t expect any answer, we paint, I tell them what I want them to do, I praise them for their cooperation. And then I shuddered when it came – the word. The little girl in Kolín – I was leaving and after weeks of silence she said: “Thank you.” And then nothing again, she went to bed.

“I was amazed at how many children there were,” she recalls. “That it was the busiest department, along with oncology. I meet 25 to 30 children there every time. That’s not the case elsewhere. I was shocked to find a 4-year-old in psychiatry. What on earth is she doing there? The things that kids have to deal with are more like adult problems. A 14-year-old girl for example, trying to take her own life because her first boyfriend had a mistress. I was struck by the intermingling of the kids, that the introverted kids are housed with the ADHD kids and then during their stay the quiet kid becomes the aggressor because he can’t take the noise and perpetual motion anymore and the calm girl jumps down the aggressive kid’s throat. But,  on the other hand, I enjoy the playful environment, the school, the summer camps and the pool on the patio in the summer. Yeah, there are bars. ….”

In time, working in psychiatry began to make a lot of sense and Martina began to enjoy it. “Playing with Colors” of Dr. Clown is a very special initiative. We don´t go into hospitals to do shenanigans, this project  brings peace, trust and kindness. The methodological aim here is literature and art – specially prepared for work in the hospital, including work after surgery, which therefor happens in bed. And the tutor needs to be empathetic and flexible, and adjust the approach according to the age, diagnosis, nature and mood of the child.

But let’s not digress: how does Martina perceive children in a psychiatric ward where they are there for a month or more without their parents?

“They often miss them very much. They want to go home, they want their mum, or their dog. They cry more here than children do anywhere else. And they snuggle more here than anywhere else. There are nice people here who love them – I mean especially the play therapists who are like angels to the kids there. I only compensate for children´s need of kindness and snuggling for a short time, but I leave again after a few hours. I don’t see many of them again, but even that happens and then we look forward to seeing each other. I have had to absorb and accept the harsher moods of some (not all) of the medical staff on this ward. They have a tough job here and face burnout syndrome so easily. You can understand it, but it is not easy to watch it. The staff too needs to vent sometimes and at times I’ve had a nurse join in my activities with the children, draw with us or even fall asleep while reading a story. That kept the kids very entertained. Jokes, humour and comical situations are needed for these kids – not to grieve, but to laugh. Fortunately, even the children in the psychiatric ward have radars for jokes.

That’s not to say that we have cured kids in psychiatry after attending Playing with Colors – that would be too easy: we’d just clone the empathetic artists and be done with the problem. It obviously doesn´t work like this!

. As Martina says: ‘I know that in two hours I’ll leave and it will be their world again. But sometimes I sow a seed and it can germinate. It may not, but it can.”

“Martina, you’ve been going to psychiatry for a few years now. What’s changed since the waves of lockdowns?” asks Manfred Franke, the founder of Chance 4 Children.

“The fact that psychiatry is everywhere now. I find children with self-harm and suicide attempts every day in all wards. Laryngitis and other diseases seem to have disappeared. I find at least 2-3 children with serious psychological disorders in every regular children’s ward I go to – in Kladno, Prague, Kolín, Říčany. Do you want to know, what happened to them in the last two years? Isolation. Some of them, resulting from the loss of social contacts, have become afraid of other children (and in their defence, they bring a knife to school), or are destroyed by the common “submarine” – that they had to stay at home locked up with a family member with whom they don’t get along well. They used to be able to avoid the person because of his/her job and their school, but during the Covid lockdowns they stayed home together. Psychological and physical domestic violence or frustration increased. Relationships in dysfunctional families escalated even further. Unfortunately, I now often work with very intelligent and talented children who would otherwise be completely problem-free. Maybe because they think about justice, principle, ideals. Anorexia is now seemingly the “smallest” problem and self-harming has become quite common. And yet you have children in front of you who think about life in a wonderful way. They may have even confided in someone to begin with – and that person either betrayed them (didn’t help) or tried to help but ultimately failed to deliver.  Because the system often protects the rights of the parents more than children´s, and they feel trapped. But ultimately, I trust these children to fight it out in themselves with their intelligence and strong will. I keep my fingers crossed for them. In the meantime, let’s paint.”

P.S: Thank you for your support. At the child psychiatry wards we often and gladly work with the book Fairy Tales to Doodle By, which we give out to children freely. You can help us a lot if you buy at least one and send it to the hospital. Martina will be happy to pass it on.

Thank you so much!